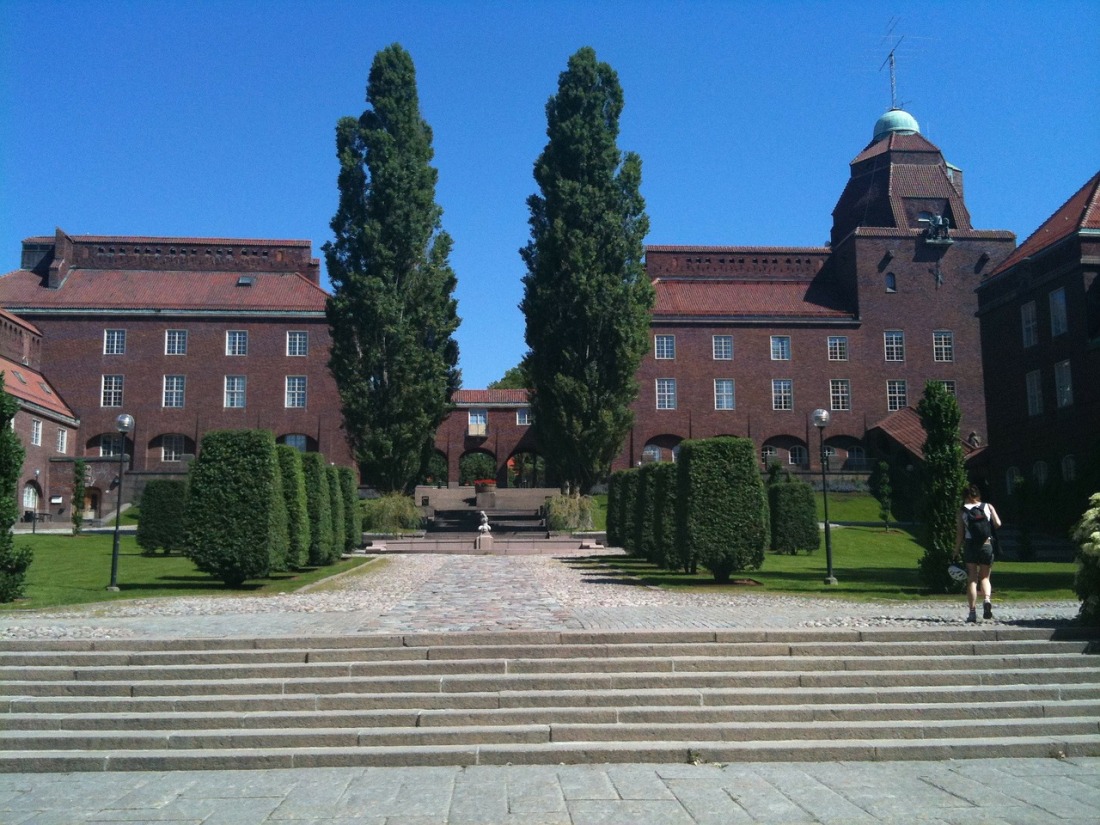 These last few days I’ve been following the Digital Pedagogy Lab Institute going on at Mary Washington University in Virginia. I tuned in first for  Tressie McMillan Cottom’s keynote on Monday and enjoyed a “hallway conversation” via Virtual Connecting with Tressie, Sean Michael Morris and Cathy Davidson and about 7 other virtual guests via Google Hangout. Since I’m following from my laptop in the living room surrounded by my very personal, yet significant clutter, I’ve been feeling pretty comfy, laid back, fully at ease.

In between sessions my mind has been very active, particularly at night. After Tressie’s talk I woke up thinking about institutions and money. There was one sentence near the end which kinda grabbed me and wouldn’t let go. It came up while she was describing the actual mission of her department’s launch of a new degree program in Digital Sociology. She asked:

“How do I develop a space for critical learning while also giving my students the benefit of an institution?

That’s what I’m trying to do.

Institutions actually do still matter. They are one of the ways that we accrue resources.” (emphasis mine)

She explained that for marginalized folks who do not have equal access to resources, institutions are a pretty good place to be. This made sense to me and mirrored much of my experience both as a student and teacher. I have benefited from the prestige, stability and opportunities of the schools I attended as well as at the schools where I have worked. This thinking also lines up with my parents’ strong belief in and commitment to a variety of institutions including our church, all the schools my siblings and I attended, and other civic and religious organization in which my mother in particular was very active.

But something was still itching. I began thinking about now. About the culture we have now. Our very digital culture which is stored increasingly in a so-called “cloud,” the companies we create are no longer “built to last” in the sense that Jim Collins writes about it. Rather, companies are called, “start-ups” as if that’s all they will ever need to do – to get started (and wait to be bought). While we are told that everything is open for “disruption” increasingly we need to ask ourselves if this is indeed what we want. So when we talk about institutions – of learning, of social value, of prominence, of tradition, it’s easy to create the mental picture of the special building, the rooms inside it, the purposeful people who inhabit such spaces. We can even imagine the habits, rules, norms by which the institution may operate based on our experiences of various forms. We do not lack notions of what an institution is or can be.

Yet linking institutions to accruing resources reminds me of how institutions are often created with very specific hierarchies in mind. An order is specified and forms the basis for how the institution will be run. Of course, then, an institution’s original resource is power. Power to make the rules, set the tone, define the group, determine a focus. That seems important to understand. Especially as we speak of disrupting institutions of various forms, let us keep in mind for whom “disruption” is likely to produce wins and for whom it may well manifest the opposite. I find no reason to believe that the power supposedly unleashed in the act of “disrupting” the institution will be evenly or equitably distributed.  On the contrary, it seems far more probable that the power may grow or shrink and likely remain consolidated in the hands of the few.

Over a year ago I published a post entitled, “How Much Higher, Education?” in which I wondered aloud about the sustainability of higher education (particularly in the US)  in its current set up of exploding financial costs to students minus the guarantee of improved standard of living in the short, medium or long range. In that essay, I expressed this wish: 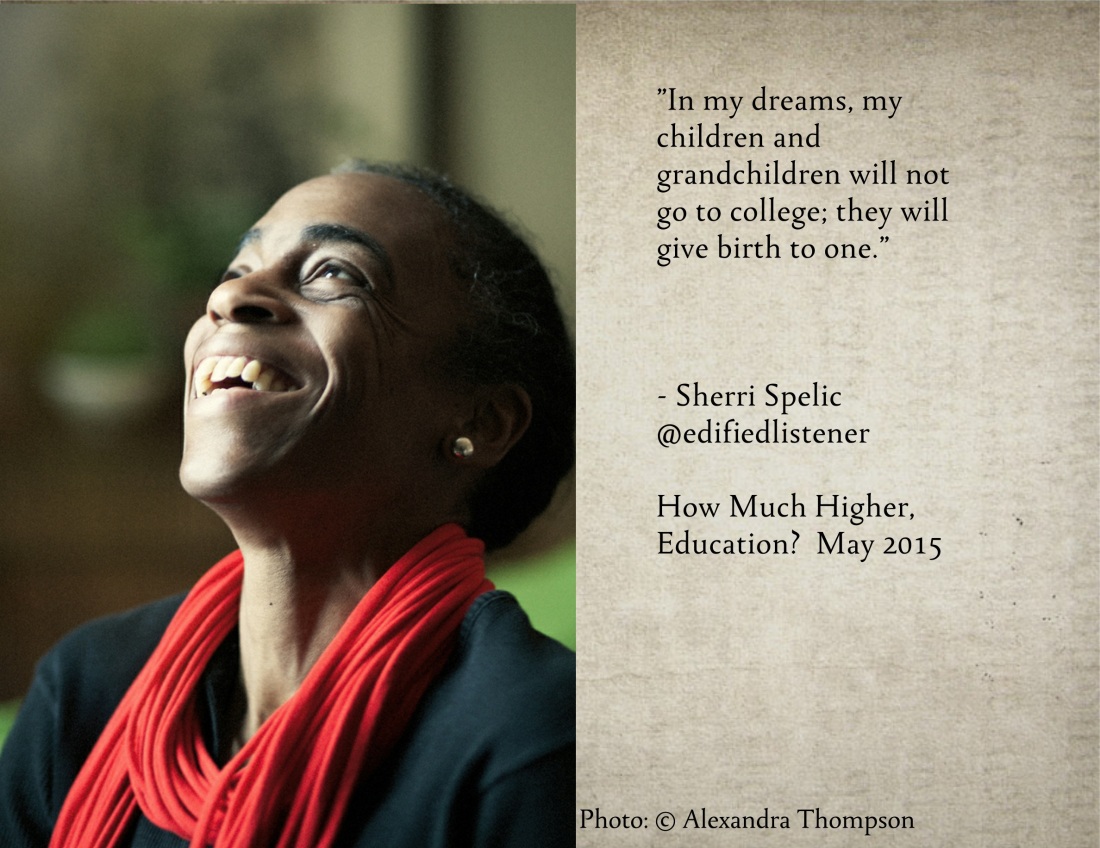 Then that warning wisdom arrives: “Watch what you wish for because you might receive.”

Do I wish for my children and grandchildren to create institutions? Do I aim to create institutions? Let’s say this. As I participate – as a parent, alumna, employee, donor, board member – I am part of the process of sustaining and shaping the institutions to which I belong and in which I have been a member. The degree to which I exercise my influence in different contexts involves choice and self-awareness. Only when I recognize my role and acknowledge my power, can I actively decide to become a force for change or to preserve the status quo.

So when I clumsily asked Jesse Stommel, founder of Hybrid Pedagogy, during a differnt “hallway conversation” at the lab about Hybrid Pedagogy and its status as, or part of an institution, I think what I really wanted to ask and understand and explore was:

What is an institution?

How do we understand it? What do we mean by that term? Are you and I talking about the same thing? What happens when we add “digital” as a descriptor? What is different about digital institutions if they, in fact, exist?

My wish for my children and their children is perhaps not so much that they go on to create a lasting thing or things – rather I wish them ample resources in the form of opportunity, fortitude, empathy, and purpose to grow their dreams into realities they can enjoy and take pride in. And the question of what an institution is, isn’t, should or shouldn’t be can stay on the table for all of us to contemplate and respond to.

5 thoughts on “What is an institution?”