Vienna, Austria joined more than 800 other cities around the world in holding a solidarity demonstration with The March For Our Lives in Washington, DC on March 24th, 2018. Below is the text of my speech. 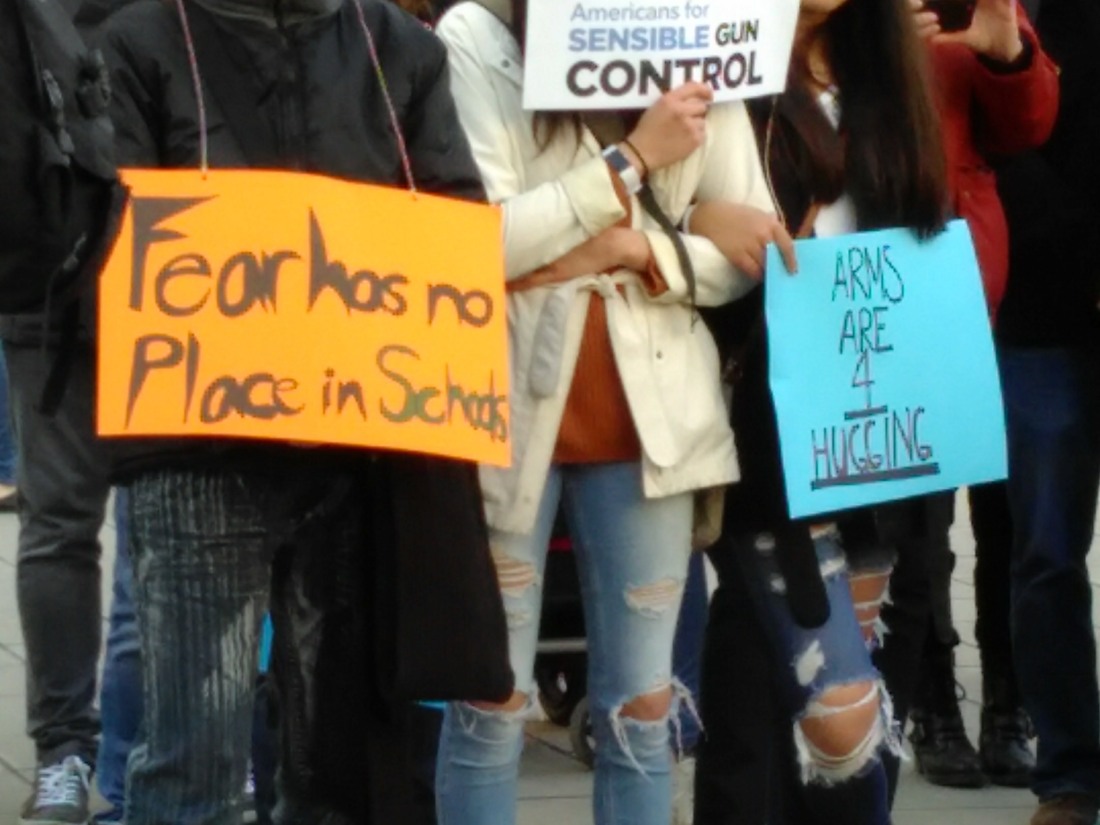 Many people will say they fear public speaking more than anything. If we were to ask American school children about the things they most fear, by now it would not surprise us to hear them say they are afraid of being shot. At school. Because school shootings in the United States happen too often to remain abstract.

Thank you to Democrats Abroad Austria for inviting me to speak today. My name is Sherri Spelic. I am an American citizen, an educator, parent, and blogger.

We who live here in Austria enjoy the incredible privilege of relative safety. Gun deaths are rare here and when they happen, they quickly become headline news.

Today I want to share some of my own views along with some words from middle and high school students in the US who have responded to the latest incident of a mass school shooting at Marjory Stoneman Douglas High School in Parkland, Florida on Feb. 14th of this year. I owe a special thanks to five of my Twitter colleagues who are teachers in public schools in Vermont, Georgia, Colorado, California and Oklahoma who supported my effort to feature student voices above all.

… gun control has always been a point of concern and debate for myself and my peers. I was born after the Columbine High School shooting, but I am old enough to vividly remember the day of the Sandy Hook shooting as well as the Parkland shooting.

I recently participated in the Druid Hills High School walkout as part of the national movement here in Atlanta. I surely can’t speak for every single person who participated at my school, but I myself felt a wide mix of emotions…

He goes on to describe apprehension, anger, determination and pride he felt as a result of protesting.

A sixth grade student in Vermont, Tess, writes about the purpose of their school walkout:

Our goal is to raise awareness about gun violence in schools and work to stop this. This isn’t just an excuse to get out of school. We really care, We want to be safe. We deserve to be safe.

It’s time for the adults in power to start listening to students. We walk into schools and we want to know it’s safe…

Listen also to an 8th grader, Orionna, who talks about her history in the shadows of school shootings:

I remember when I heard about the shooting at Sandy Hook. I was 9 and I remembered I cried and cried because those kids would not be home for Christmas with their families. … It’s not right that kids are going to school, scared that they might not go home that night, or that they might lose their best friend, or their siblings.

Imagine marking your time in school by the shootings you recall and where you were at the time. That’s exactly what many of these students have: a personal timeline of mass shootings in schools. And instead of enacting stringent gun control laws, we have subjected kids to more frequent lockdown drills while our lawmakers talk about arming teachers.

When Tess says, “We want to be safe. We deserve to be safe.” With our words we as a nation say, “of course, you do!” But kids quickly learn that the adults don’t mean it. The laws do not change. School shootings keep happening. The interests of the gun lobby are placed ahead of children’s immediate safety.

And while we’re on the topic of safety, remember please that our kids, our students, our grandchildren need more than tighter gun regulation to feel safe at school.

Test scores will tell you nothing about the wellness of a student body.

There’s much more to keeping kids safe at school than reducing their risk of being shot at. And I can’t believe I have to say that out loud.

The fact that our legislators are scratching their heads about the connection here blows my mind.

If you’ve been following the Parkland teens closely you will  know that they have, in a remarkably short time, joined forces with young people in Latinx, Black and Native communities who have been combating gun violence for much longer. They are learning how gun violence plays out in poor neighborhoods, in urban areas, on reservations. There are significant differences. Among them the fact that police shootings of unarmed black and brown people likely pose a larger threat to teens of color than the prospect of a mass shooting.

Yesterday in response to the latest police killing in Sacramento, I tweeted: “what about those who are given guns but have NO control?” This is also gun violence affecting our communities that cannot go unaddressed. This, too, is gun violence rooted in toxic masculinity and corrupted power structures.

And the Parkland activists have opened their eyes to it. In an article for Teen Vogue, Emma Gonzales describes the approach they have taken:

“We Stoneman Douglas students may have woken up only recently from our sheltered lives to fight this fight, but we stand in solidarity with those who have struggled before us, and we will fight alongside them moving forward to enact change and make life survivable for all young people.”

These young people are showing us how it’s done. This is how you build bridges.

This is how you create a movement that is both focused and inclusive.

I want to close with some real talk for our legislators from an 8th grader, Harlan, who asks some tough questions:

Why do we keep letting these people murder innocent children when it is our LAWS that allow them to die?

What are you so afraid of, Congress? Why do you never do anything unless it’s hurting you? Or your husband or wife or child? Or are you afraid that the NRA will cut off your cash flow? There’s more to this country than just you! You need to stop being selfish and take action!”

I am hopeful that my own children and grandchildren will look back on this political moment as the one where our young people led us in the fight for safe schools and safe communities. And they won.

I delivered this speech at the March For Our Lives demonstration in Vienna, Austria (March 24th, 2018) organized by Democrats Abroad Austria. Student voices included in this piece were taken from speeches and letters forwarded to me by Christie Nold and Marian Dingle. Further thoughts regarding the conversation around gun violence protests in different community contexts provided by Shannon Carey, Jennifer Williams and Julia Torres were invaluable in pulling this speech together.